How to Survive Summary

How to Survive Review

505 Games has announced the first downloadable content for their zombie apocalypse game How to Survive called the Heatwave DLC.

How to Survive releases on PC and XBLA, PS3 soon

Third-person action title How to Survive puts us against a zombie outbreak where we need to take care of our most basic needs: "food, water and shelter" alongside scavenging for tools and weapons.

It supports co-op so you needn't cower in fear alone during the dark nights. Choose between three characters and explore four zombie-squatting Columbian islands.

Five 505 Games to Feast Your Face On

How to Survive zombie action-adventure coming to XBLA, PSN and PC this autumn

A unique survival guide is on its way to Xbox Live Arcade, PlayStation Network and PC via Steam as 505 Games announce How to Survive, which is an action-adventure set on a remote archipelago.

We're told there'll be robust crafting, a host of playable characters, and of course zombies. To survive we need the bare essentials as well as tools and weapons to fend off the shuffling hordes. 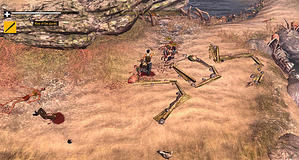