10 December 2013 | By Jonah A. Falcon
Zombie Tycoon 2: Brainhov’s Revenge, a light-hearted zombie real-time strategy game which recently got approved on Steam Greenlight, is now available on Steam for $9.99 USD.

"In the eight-chapter campaign, players will lead a horde of zombie troops as the evil mastermind, Orville Tycoon, as he seeks to eradicate the remaining survivors of Finkleville and challenge his former mentor, Professor Brainhov, to see whose zombie race is superior," states the press release, as slow shambling zombies are pitted against fast feral ones.

* Become a Keyboard Warrior: Play the game with a keyboard and mouse, with new controls and interface designed for the PC, or plug in a gamepad controller for a classic Zombie Tycoon 2 experience.

* Play as two different Zombie factions, and squads: Choose from classic, slow-moving zombies or frantic, highly infected zombies with a variety of six unique zombie units such as the Scavenger Zombies from the Municipal Dump or the Engineer Zombies from the Hardware Store.

* Unique Monster Units: Command four special monster units like Badgerker (he really doesn’t care) and Skidmark, the biomechanical monstrosity who will steamroll its way through any crowd.

* Frenetic multiplayer action: The objective is to crush your opponent’s mad scientist’s mobile HQ by capturing buildings, transforming zombies, level up monster units and gain control over the map. 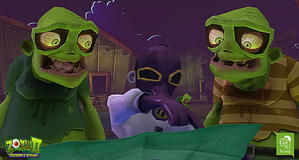