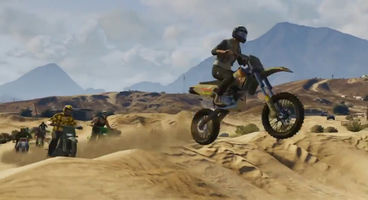 GTA Online was big enough of a revelation by Rockstar Games, but they went a step further with an editor for creating custom races and challenges for others to take on, with it set to expand over time.

Ideally Rockstar wants players to be able to "create anything that we can create within the team," and for it to be a painless process. A 'few ranks' unlock the editor.

16 players can occupy a single online world within GTA Online, with users able to decide the types of people joining their slice of Los Santos.

However just letting people online and eating up Rockstar-made content wasn't enough as the team desired to give the power of content creation to the players. Initially only races and deathmatch scenarios will be supported.

"We want to give players the opportunity to create anything that we can create within the team and for it to be as easy as sending a text message," said Rockstar North's Leslie Benzies.

"I think we've managed that with the editors. Now anyone can have their own races or deathmatches spread amongst the world of Grand Theft Auto Online players within minutes."

"The race and deathmatch creators are the simplest and will be available first. We'll then release more variations to allow any type of mission to be made." Rockstar have said they plan to support GTA Online for a very long time with new content themselves, but by also letting fans run wild with ideas.

No one can just hop into GTA Online and fire up the editors straight away as Rockstar want people to know how the game works first. "We want people to understand the game before they go off and create," explained Benzies. "You only have to be a few ranks to be able to start, so you should be there within an hour of play."

Deathmatch offers creators the chance to "set the type, default kills, as well as the time. You then place the spawn points, weapons, and any extra props and vehicles you'll want on the map". Rockstar aren't doing this to be lazy however as official content will continue to stream out.

"There will be a continuous flow of content and we'll be creating new missions faster than people can play them," says Benzies. The dream is for players themselves to start creating situations "as complex as the ones found in our single-player games". Storytelling is one area the studio wants to see blossom.

"We want to give the player the power to make anything their brains can come up with," says Benzies. "At some point in the future, we'd like people to be able to make their stories with all the tools we have available to make ours."