BioWare: Morrigan "will not be a party member" in Dragon Age: Inquisition 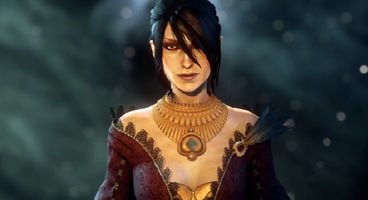 Dragon Age: Inquisition sees the return of multiple race selection for the player, and even Dragon Age: Origin's Morrigan struts back into camp. However the 'Witch of the Wilds' won't be sitting by our camp fire.

BioWare's Mike Laidlaw confirmed she'll "not be a party member" but added her role is "not a cameo," which would be a great disservice indeed. She has her own 'big plot'.

"It is fair for people to understand that she will not be a party member. That's going to disappoint some people," Mike Laidlaw said, "but it's important for us to be upfront about that."

The studio is keeping Morrigan's role close to their chest so as not to spoil anything, but she'll definitely be more than just a plot device to create some drama. "It's not a cameo," added writer David Gaider. "She plays a significant role." This likely refers to Morrigan's activities from Dragon Age: Origins were she conceives a child that will host an Old God soul.

"She has a human role in this plot," added Gaider, "which may surprise some people because they might only think of her as a plot device. She has this big plot she's involved in, and while that's true to an extent, I'm taking her to a human place. That will make sense after the fact." What of player choices in Origins? BioWare is prepared.

Gaider teases that our DA:O Grey Warden's treatment of Morrigan will have effects "of varying degrees" in Inquisition.

"Yes. The various states that Morrigan can be in – of which there can be quite a few, because we don’t know when to stop when it comes to making decisions – they’re all recognized. Whether or not they have the ultimate effect like the kind of reactivity someone imagines, that depends on the person. But we do recognize them and it does play a role of varying degrees depending on the surroundings.”