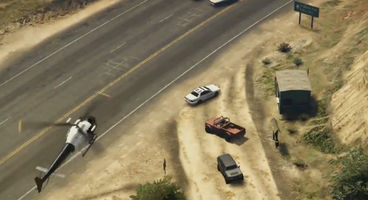 This statement was in remark to news that "speciality PCs like gaming systems" are on the rise, noting PC gamers were gearing up for Call of Duty: Ghosts, GTA 5 and Assassin's Creed 4.

Rockstar Leeds was recently hiring for PC, and fan petitions for a PC GTA V are getting a lot of attention. Rockstar has said consoles are their focus for now.

The studio's history says they'll be bringing Grand Theft Auto V to PC eventually but that it usually follows a quarter or two away. The remark of PC gamers prepping their game rigs for GTA V was likely referring to the expectation that it would arrive eventually. Would Rockstar actually release GTA V so soon on PC? No they wouldn't.

“The PC market is evolving as entry level laptops face pressure from tablets. Yet sales of speciality PCs like gaming systems and work stations continue to grow. The disparity reflects how consumers use these different classes of PCs. Many consumers look for PC as a general purpose device they can use for browsing, email, social media and video."

Nvidia's Chris Evenden continued: “But much of this can be better served by a tablet. In contrast, gamers are preparing their systems for a strong roster of games coming this fall, including blockbuster franchises, such as Call of Duty: Ghosts, Grand Theft Auto 5 and Assassin’s Creed 4.”

GTA V has yet to be formally announced for release on next-gen systems either as Rockstar are keeping all eyes on Xbox 360 and PS3 for now. It makes financial sense to them to keep any mention of PC, Xbox One or PS4 muted as otherwise they'll lose potentially millions in sales as fans wait out for 'superior versions' of the game.

Grand Theft Auto V releases on Xbox 360 and PS3 September 17th. Red Dead Redemption was a huge hit for Rockstar but it has yet to gallop onto PC, while the now rather aged PS2 Bully eventually ported to Xbox 360 and then PC.