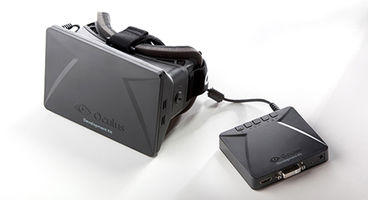 Virtual reality headset Oculus Rift just got $75 million fatter as extra trucks of cash were dispatched to aid in the push to the consumer market. This all began with a $2.5 million Kickstarter campaign last year.

As part of this new injection of cash, Andreessen Horowitz co-founder Marc Andreessen will join the Oculus VR's board of directors. This all helps "take the final steps" toward the finish line.

The Oculus Rift has been snapped up by a huge range of development studios intrigued by its full 3D stereoscopic headset, helping immerse gamers like never before.

"Over the past 16 months, we've grown from a start-up to a company whose virtual reality headset is poised to change the way we play, work and communicate," said Oculus VR CEO Brendan Iribe.

"This additional infusion of capital, as well as the leadership and experience of Marc Andreessen, will help us take the final steps toward our ultimate goal: making virtual reality something consumers everywhere can enjoy."

Andreessen Horowitz, Spark Capital, Matrix Partners and Formation|8 have all added to the funds.

"We believe Oculus will not only alter the gaming landscape but will redefine fundamental human experiences in areas like film, education, architecture, and design," said Mark Andreessen. "Oculus is at the tip of the iceberg of its potential, and we're incredibly excited to help them change the world."

So enticing is the prospect of Oculus Rift's impact on the games industry that id Software co-founder and notable rocket scientist John Carmack left his company to join Oculus VR as chief technology officer.

"The games industry is well past the point where more pixels, texels, flops, and frames displayed on the same fixed screens are really changing the experiences that players get," said Carmack back in November.

"I could say the same about other digital experiences as well. What will revolutionize gaming, and interactive content in general, is putting people inside the digital world. That is our goal at Oculus, and this Series B will help us get there."