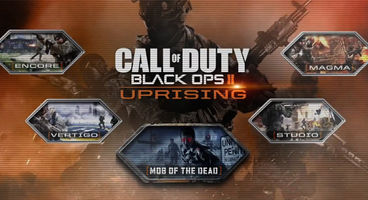 Treyarch are marking the occasion of more map pack DLC for PS3 and PC Call of Duty: Black Ops 2 with a "Double Weapon XP" weekend spectacular, which officially begins May 17th and ends on the 20th.

The 16th heralds the release of the Uprising DLC for PS3 and PC, ending the platform exclusivity. While the message was only spotted on Xbox 360, double XP weekends go multi-platform.

Uprising adds four new multiplayer maps - Magma, Encore, Vertigo and Studio - as well as a new zombies map called Mob of the Dead. It's $14.99 or 'free' for season pass.

"Don’t even think about resting those thumbs, because Double Weapon XP weekend is coming this Friday, May 17, starting at 10am/PDT and running through Monday, May 20 at 10am/PDT,” announced Treyarch.