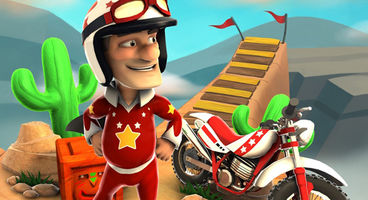 Joe Danger and Joe Danger 2: The Movie will release via Steam June 24th. Meanwhile Hello Games is working on a next-gen project that isn't Joe Danger-based.

The PC versions have gained some bonus features:

"For the PC version of JD, we’ve had a lot of fun. We’ve added a bunch of new content for both games – some new levels for a start. There’s lots of graphics settings, as well as controller, mouse and keyboard support. Full Steam Big Picture Mode (I was just playing 1080 with 16xAA on my TV – looks soooo nice)," said Sean Murray from Hello Games.