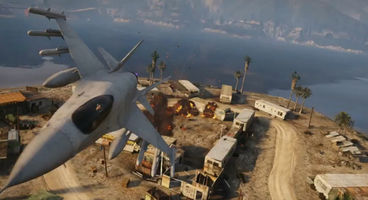 Rockstar Games has just launched their debut trailer for Grand Theft Auto Online. With little doubt they've managed to torpedo expectations out of the water as multiplayer looks seamless from single player.

Our online characters are fully customisable, able to buy property like houses and cars, can undertake missions alone or in co-op, or just cruise around Los Santos. Editor for custom challenges.

Basically take Grand Theft Auto V's world and dump it online and you'll get close to what Rockstar is offering. The Crew system is ideal for tackling player launched heists.

Our GTA Online personas exist in a persistent online environment so we keep our progress. For those who prefer something more akin to GTA IV's multiplayer then Rockstar have you covered too. Interestingly they include an editor for players to create custom races and challenges to share and take part in.

Online also provides more structured missions from notable characters from the main game. It's almost as if Rockstar are giving you a fourth character to play as, which is nothing short of impressive.

"That's another reason for the two week delay between single-player and Online. We want to give people an opportunity to actually get their heads around what's happened, because even single-player is a big advancement from the old games. There's a lot of new things to learn," said Rockstar North president Leslie Benzies.

Our multiplayer character will become the fourth option on the Switch Wheel between Franklin, Michael and Trevor.