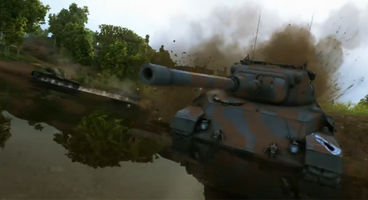 Free-to-play MMO studio Wargaming.net is tuning up and spit polishing those tanks ready for a right rumble to mark the 15 years they've been in business. They'll follow a 7 vs. 7 tournament format, common to eSports.

Yes, some tourney action is happening this month with the final games due June's end. 2nd and 3rd places won't walk away with empty-hands, but overflowing with "massive in-game gold prizes".

"This is a great opportunity for teams around the globe to show their peers and prove they have what it takes to really be the best at World of Tanks,” said Alexey Kuznetsov.

"“We’re extremely excited to welcome the winning teams to Belarus and give them a closer look at how their favorite game is made.” Kuznetsov is Wargaming'net's eSports lead for World of Tanks. The tournament will unfold in Europe, North America, Russia, South Korea, Southeast Asia, China, and Vietnam.

Winning teams get an "all-expenses-paid" trip to the developer's studio in Minsk, Belarus. Recently Wargaming.net announced they were donating £80,000 to the construction of a state-of-the-art education centre at the UK's Tank Museum in Bovington. They're also in attendance at Tankfest 2013.