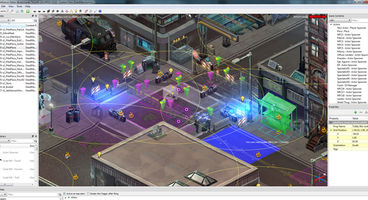 Originally due for the end of this month, Shadowrun Returns has been delayed a month as it now launches July 25th. The great news is that when it does so will the full game editor with campaign files.

Harebrained Scheme are eager to let fans "start from what we have created" and do what the heck they want with it. Over $1.9m was raised through pledges for Shadowrun Returns.

A full editor to tweak the game was promised as part of the Kickstarter campaign. Their hope is that the community will devour it and come up with huge stories.

"The idea of releasing all the editor files for the Shadowrun Returns campaign was based on my experience working with Trent Reznor on the Alternate Reality Game for his album Year Zero," Harebrained Scheme's Jordan Weisman said.

"Trent empowered fans to remix his music any way they wished by releasing the Garage Band tracks with the album. With Shadowrun Returns, we are doing the same thing. Players can start from what we have created and build on it, revise itor use it as a starting point for completely new stories."

Shadowrun Returns releases on PC via Steam, on iPad and through Google Play for Android tablets.