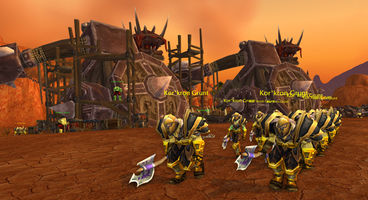 The latest update to World of Warcraft is this week with Patch 5.3. It tweaks a number of things as well as adding all-new stuff like Heroic Scenarios and a continuation of the legendary quest line.

There are also several new mounts like the Enchanted Fey Dragon. Four new scenarios, a new battleground and a new arena await in 5.3. Pandaria now levels up all mining and herbalism.

The addition of Heroic Scenarios require a pre-made group of chums to be of item level 480 or above to start the queue, with the first of the day rewarding 120 Valor Points.

Wrathion's questline also continues in patch 5.3 with a few more hoops to jump through. There are four challenges which each catering to a different kind of role (tank, healer etc.) and that when completed will reward an item level 600 cloak.

This patch also sets up the scene for patch 5.4 as the fighting gets taken back to Azeroth in The Darkspear Rebellion. The Troll area in the Valley of Spirits has been taken over by the Kor'kron Guard, with Kor'kron Overseers harassing residents. NPCs aren't offering services as it's 'too dangerous' there right now. There's some real trouble and strife in Orgrimmar.

For a detailed rundown of all the latest happenings in Patch 5.3 check out MMO-Champion.

The official patch notes from the Public Test Realm can be viewed here on Battle.net.