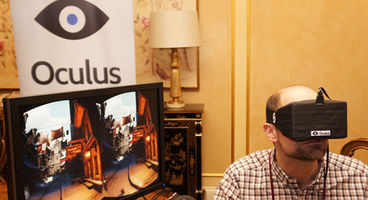 Motion sickness is a known problem for a many, but Oculus Rift causes the inverse of that condition as there's no actual motion but walls are moving on by. The team has to pioneer solutions.

VR developers "still have a long way to go here," but they're deeply invested in finding answers. Ascending stairs can trigger the 'sickness', or quick lateral movement.

3D vision can already cause some to experience eye strain, dizziness and headaches. A full VR environment could potentially lead some to feel very ill.

"In motion sickness there's all this motion but you don't visually perceive the walls and ceilings are moving," said Oculus Rift's Nate Mitchell, at GDC Europe 2013. "This is what creates the conflict that makes you dizzy. With simulator sickness it's basically the inverse. These are all the things you want to avoid as game developers."

The trouble is the consensus among the medical community on tackling the issues is muddled. "VR systems still have a long way to go here," Mitchell says. "But this is the sort of thing developers like Oculus need to make."

"I'm of the opinion that head bob is not for us," he added, "but it needs more research. It's really this thing that we can't tap into," he continued, "but over time we will see less and less simulator sickness."

Game too easy? Why not fight AI on insanity mode whilst simultaneously battling actual sickness? Hardcore.