Dragon's Prophet goes all Christmassy with the Silver Dragon event

20 December 2013 | By Nick Horth
In yet more Christmas related news (I'm sure you're not fed up of all these festive events yet) free-to-play MMORPG Dragon's Prophet has announced their own Christmas event, with the Silver Dragon festival.

The event promises two new dungeons as well as various winter-themed prizes and decorations to obtain. There's even a special Xmas dragon to catch.

As an early Christmas gift Infernum opens the gates to the new high-level region Olandra. Lush, green meadows and forests are waiting to be explored, unknown adventure await on the sunny sand beach and the two new dungeons challenge even the toughest dragon riders. In addition the level cap is raised to 94. A new video shows what awaits players in the event zone.

Players can expect Christmas trees and the chance to adorn their homes with the season’s most beautiful decorations. Adventurers can also encounter a mysterious new dragon called "Randolph" who has a very specific means to be caught. It’s up to the players to find out how this one of a kind dragon can become their companion. In the capital Arteicia, a large and magnificent Christmas tree leaves the city‘s streets brightly illuminated. From here, the player can transfer via teleport to the event zone. In a wintery landscape players are free to help townsfolk with tasks, take part in an enormous snowball fight and have a chance to win useful prices. All these marvelous activities will reward the player with goodies fit for Christmas, such as experience potions and fireworks to bring in the holiday season.

Infernum also announced that they've been working with video game and tabletop RPG artist Mike Sass in order to design some cool goodies for players, including a rather snazzy looking new dragon pet.

Infernum is also pleased to be working with the video game pioneer and well-known concept artist, Mike Sass. After he has previously completed many projects for BioWare and has especially illustrated role-playing games for the most important representatives of the industry. He has now designed exclusively for Infernum the dragon "Sadras, the Bone-eater". Those who pre-order the brand new, huge dragon package in the shop, not only have the chance to get an exclusive dragon, but will also receive this awesome dragon as an additional Christmas gift.

More info regarding the Christmas event and the game download can be found on the official website. 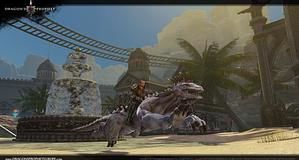