Quantum Rush is currently in alpha, and the developer will be holding a closed beta soon. The game is due to be released on PC sometime in 2014. 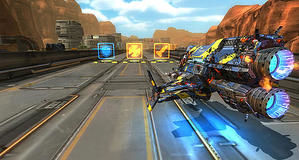