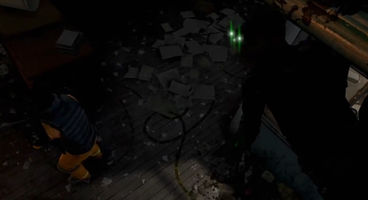 Jade Raymond of Ubisoft Montreal explains that Splinter Cell's stealthy ways make it a more 'complex' game than most others, which has led to its popularity suffering - demands we think a lot before we act.

While Conviction was a lot more action-orientated, it still required you to plan out your approach. Other titles with stealth elements 'forgiven a lot more' than Splinter Cell.

Approaching release is the new Splinter Cell: Blacklist which promises to deliver both a lot more action, if you want it, or a more traditional 'I was never here' sneaking.

"One of the things that held it back is despite all of the changes that have happened over the years, it's still one of the more complex and difficult games to play," Jade Raymond explained to Eurogamer.

"Even though we do have core fans who are like, 'Oh, I want to have more of this experience,' when you play any other game that has stealth elements, they're all a lot more forgiving than Splinter Cell."

"I guess Splinter Cell stayed with the most pure approach to that stealth experience."

The original Splinter Cell was highly praised for tackling such 'hardcore' stealth gameplay, and Sam Fisher instantly earned himself quite the following among gamers. "The first thing you have to do when you start in a map, even in Conviction, which did go quite a bit more action-oriented than the past, is the planning phase," she continued.

"So before entering a room you've got to spend some time thinking, right, so where are the guys positioned? How will I get through here? Where's cover? How do I hide? Okay, I'm going to shoot out those lights. 'This is my strategy' is an important first phase. By default there aren't many games where that's the phase. Most games you can walk in and you start shooting right away, or you just walk in and you improvise as you go along."

"It's really about being intelligent and taking that time in the first phase to plan out how you're going to do things, and understanding the elements, and even planning your gadgets and your load-out and being smart about it. That's where you get the thrill, but it's a different way of playing than most games on the market these days."

Ubisoft Montreal has painstakingly made sure the 'pure' Splinter Cell experience is in Blacklist.

"We brought back the purest hardcore version, which is, you want to ghost through the level and get through it without killing a single person. Every single thing you want to do you can do in a non-lethal way. That requires the most planning and being the most strategic," assured Raymond.

"You can even play that in Perfectionist Mode, which means if you want you don't have any of the added things, such as Mark and Execute, that make it easier. That's for those who want to plan it out and feel really smart, and, 'I'm going to use the Sticky Cam with the Sleeping Gas and them I'm going to whistle and the guy's going to come,' and do the full set-up."