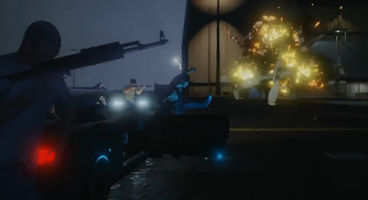 Apparently the initial revelation that GTA Online would only support 16 players in its various multiplayer modes is wrong; it will be supporting 32 players instead. This info was gleamed from config files.

The report of GTA Online's more impressive 32 player support comes from Cinema Blend. They claim they've had an "increasingly intense brush-in" with Rockstar's legal legions. The site cannot reproduce any of the code, either in actual code form or through capture images. Neither can they link to it anywhere.

Earlier data mining found that a PC version is definitely in the works and may in fact be the 'lead platform'. Cinema Blend speculate it would explain a few things like the technical issues the Xbox 360 and PS3 have been having, considering they might be glorified 'ports'. Internal file structures are also 'heavily PC'.

32 is a much more pleasing number than 16 for an online GTA environment; but PC and '64' would be golden. GTA Online is scheduled to launch at the beginning of October for free to owners of GTA V.