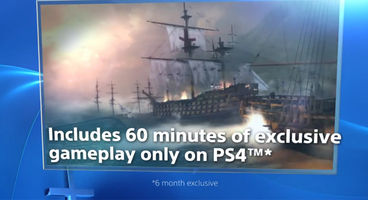 In what is now a plague upon the modern day multi-platform release, Sony has secured some "exclusive" DLC for PlayStation 4 for both Watch Dogs and Assassin's Creed IV: Black Flag.

A recent PS4 trailer however reveals this exclusivity is only for 6 months for AC4 and Watch Dogs DLC. It's unknown if the PC will be affected by this fan-punishing promotion.

A similar deal was struck with Assassin's Creed 3's Benedict Arnold missions, however the PC version included them as part of the more Deluxe style editions.

Hopefully at least the PC versions will be spared the bubonic exclusivity plague for both of these. While the DLC is unlikely to be critical to the main experience of either, it's nice to know you're actually getting your full monies worth. This exclusivity practice was popularised by Microsoft for Xbox 360 who openly threw money to studios for deals.

Assassin's Creed IV: Black Flag releases on Xbox 360 and PS3 October 29th and on PC November 19th in the US, 22nd in EU. Watch Dogs was due this November but has since been pushed in early 2014.

The Gold Edition for Assassin's Creed IV contains the Aveline DLC as part of the package. Interestingly the European versions of the same PlayStation 4 trailer don't mention any exclusivity, only the US trailer.