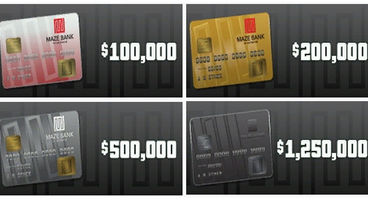 It has been discovered that Rockstar is planning on four denominations of 'cash cards' for GTA Online when it switches on October 1st. These micro-transactions were buried in a publically viewable XML.

Eurogamer is reporting their source on the matter is close to the multiplayer version of Grand Theft Auto V as they are using an early access build.

That same XML that reveals these cash cards also listed the Atomic Blimp as well as the Special and Collector's Edition content as being purchasable. Exactly how strapped for cash will players be in GTA Online and what's the in-game pricing on items? Apparently a $1m car in GTA V is considerably less in GTA Online, around $150k.

Only a single safehouse can be owned by a player at any one time with the most expensive at $400k. A rebate is offered on your property when you want to move so your in-game cash isn't flushed away. Weapon and car modifications however are much costlier with initial items unavailable until unlocked by character rank.

Having all the cash in the GTA Online world therefore won't grant you access to everything as you need to work towards them. This will hopefully nip the 'pay-to-win' syndrome in the bud. It seems these cash card micro-transactions are more for aesthetic purposes if weapon and car mods remain locked to rankings.

Rockstar Games is yet to comment on these findings. More information is due about GTA Online soon.