Ubisoft: Stealth in Assassin's Creed IV "one of the biggest things" we've addressed 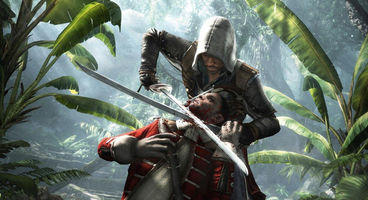 Assassins tend to work in the shadows, do they not? It's bad enough being bald with a barcode slapped on the back, so stealth is your friend. Ubisoft agree and so Assassin's Creed IV is a lot sneakier.

They've taken "a lot of feedback" from Assassin's Creed 3, and so knew stealth was something they "needed to push." Sneaking about in AC4: Black Flag has been made "much more intuitive."

The system governing player detection, how to escape it and generally what is accepted as 'sneaking up' to a guard has been simplified, with feedback to the player clearer.

"A lot of feedback: people loved the naval, people really enjoyed the fight, but we knew that the stealth element was something that we needed to push”, said director Ashraf Ismail of Black Flag.

The Ubisoft team has "put effort into the system to make stealth really viable gameplay", promising that "if you really wish to play the game completely in stealth then you can". We get a small glimpse as to how stealth gameplay works in the latest gameplay walkthrough from the studio, which had Kenway stealthily plunder some treasure.

They went about improving stealth by “really simplifying the rules of the system. I think this was something that was hard for players to deal with previously; that they didn’t understand all the rules or the feedback wasn’t strong enough”.

The new approach “really simplifies how you get detected, how you escape detection, how you sneak up on a guard. All this stuff has been really simplified and made much more intuitive. The feedback itself has also been improved, so now we really focus on what the player needs to know. And that’s the feedback we get.”

One foe you'll prefer stealth are the gunners. “They’re really, very deadly. So these are characters that you pretty much want to sneak up on. You don’t want to run towards them, because they’re very deadly, very powerful, they’re always on high ground, so they have a bit of an advantage on you, so you really have to use the stealth to take them out”.

Assassin's Creed IV: Black Flag releases on Xbox 360 and PS3 October 29th in the US, November 1st in the EU. PC sees a release later in the year, which has become an expected disappointment by fans of the series. Boo! Hiss!