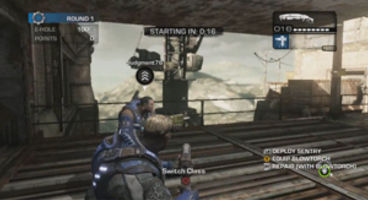 Microsoft will be releasing a multiplayer demo for Gears of War: Judgment featuring the new OverRun mode, which is a class and object-based showdown between 5-player teams of Locust and COG.

Should you pre-order from GameStop in the US, then you'll receive access to the demo as early as March 15th. There is also a character skin and Lambent weapon skin.

For those pre-ordering from other retailers worldwide, Microsoft announces the 'Classic Hammerburst' will be your in-game reward. It's the "standard-issue assault rifle of the Locust Army."

All XP earned during the early access demo will carry over into the final game if Gears of War: Judgement is purchased and played the first week of its US launch, which is March 19th. Below are the two additional GameStop bonuses:

Decorated war hero Marcus Fenix is the legendary leader of Delta Squad, a small group of COG soldiers responsible for saving mankind from destruction at the hands of Locust and Lambent forces. This exclusive character skin takes Marcus back in time, six weeks after the end of the Pendulum Wars, and during the chaos of Emergence Day – a time before he was hardened by his long imprisonment.

This exclusive weapon skin lets you show off your grub-slaying exploits and customize select weapons with the emulsion of your fallen Lambent foes.