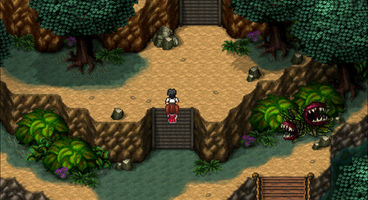 The final chapter of the Penny Arcade Adventures - On the Rain-Slick Precipice of Darkness series, Part Four, will be coming this Spring, and developer Zeboyd has revealed some of the details.

According to Zeboyd’s Bill Stienberg, “Rain-Slick 3 took place entirely in one city but Rain-Slick 4 takes place in an entirely new world, essentially. That gives us the freedom to really open up the game to a large and varied environment and let players explore.”

The developer also hinted at their next project, called CSH, which they call a “sci-fi/spy RPG”. The project will probably be posted on Kickstarter, and will feature a "distant future setting, female protagonist, on-map battles, more animated sprites, cool level-up system. In short: the works.”

The developer is aiming high, promising, “Chrono Trigger has held the position of best 16-bit style RPG for too long — it’s time for that position to be challenged!”