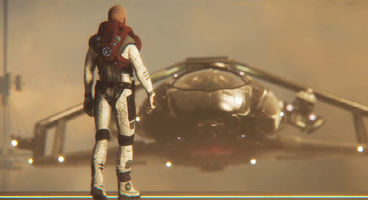 It's probably a good thing that Star Citizen is the most crowd funded project ever with over $10m considering that development costs to build those gorgeous star ships are at least around $35k each.

All that modelling and application of realistic functions takes huge chunks of time, especially for the mega-huge ship designs. Polygon counts will dwarf what triple-A titles use for vehicles.

Whereas 30k polygons might make up a vehicle in top notch games today, Cloud Imperium Games is injecting about 300k per ship they make.

That $35k price tag covers a small fighter with everything functioning realistically including animated dashboard displays, with internal and external moving parts. Larger carrier-class designs like the Bengal Class - a kilometre long - explode upward in asset development and can reach to highs of $150k.

7 million polygons make up the detail of the largest creations. A small fighter will be around 300k polygons, which is a lot compared to what most games use which is "10,000 polygons for a character and 30,000 or so for a vehicle."

Understandably this is "the most customizable game I've ever done," said Roberts. He thinks of each ship hull as a PC case where the player gets to cram in what hardware they want.

Originally Roberts and his studio said they'd need 12 to 14 million dollars to get Star Citizen into alpha form and out the door. They plan on using the 'Minecraft method' of seeing the game reach the finish line by encouraging purchases for the alpha builds. The whole studio has been taken by surprise with such huge community interest and pledges that they're rethinking their finances.

"I'd rather run Star Citizen as a community-funded game universe. All I care about is making the best game possible, which is what I think the community wants, too. As long as we're sustaining enough revenue to add more content and all of the rest of the stuff, that's great by me."

For a look at just how detailed Star Citizen's hangar of ships will be, check out the trailer below.