28 September 2013 | By Jonah A. Falcon
Swedish indie developer ThreeGates has announced that the studio's first game, an action-RPG named Legends of Aetherus, is now available on digital distribution. including GamersGate. The game is currently $23.99 USD for a first week launch sale.

The game seems to be a physics-based single player action-MMO, with four player co-op that can be run either as PvP arena map combat or PvE adventuring.

The game features "Officer Skills" which allow the player to customize their hero anywhere from "a heroic tank to a stealthy ninja, a few examples of which are: Specialty Melee Attacks, Defensive Emplacements, Carnal Strength, Punji Sticks, Inspiring Chants, Defensive Hymns and Javelins." The character creator is likewise described as "dynamic".

The game also includes a robust crafting system that allows the creation of traps and devices including "Bombards, Sticky Bombs, Satchels, Turrets, Chinese Lanterns and Rockets," as well as the ability to forge weapons and gear.

Gamers can check out more of the game on the official site here. 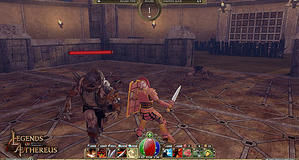