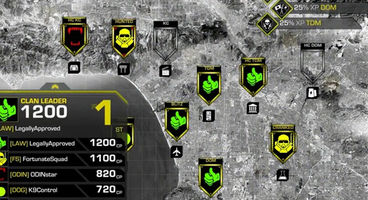 The metagame of Clan Wars for Call of Duty: Ghosts is explained some more in a recent blog by Infinity Ward who say the system of nodes was designed to "ensure no one Clan can dominate" every node.

The important thing to remember is that wins are counted on a "per-player basis," and aren't dependent on using a Clan vs. Clan playlist. If you're in a Clan then you're already fighting the good fight.

Infinity goes on to detail how nodes are captured, defended and what happens when its lost. They wanted the pressure to mount if you start capturing nodes across the map.

If your Clan teams up in playlists designed to lead to a nodes capture then more points are awarded as opposed to going it solo. These nodes give special bonuses while they're held such as XP boosts. Once the threshold is met to capture the node then your Clan has the choice of 'staying to defend' or leaving for another.

As other Clans try to take the node from you the score you racked up to take the node in the first place is eroded and so if it isn't topped back up you'll lose the node. Infinity Ward also coded a maximum number of wins allowed to ensure the nodes remain competitive, so a Clan can only hold out for so long.

Check out the full blog post by Infinity Ward for more in Clan Wars nodes.