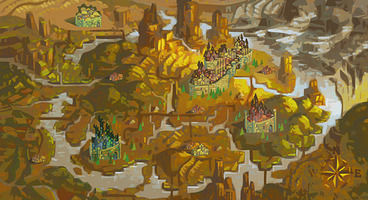 Earlier, Double Fine promised a new game, "something new". The publisher has revealed what the new game is on Kickstarter: a fantasy turn-based strategy game called Massive Chalice.

According to Tim Schafer's studio on the Kickstarter page, "We're inspired by classic tactical strategy games like X-COM, Final Fantasy Tactics, and Fire Emblem, as well as Game of Thrones’ array of noble families. With these influences in mind we’re creating an epic, replayable turn-based tactics game where you train generations of heroes to repel a demonic invasion."

The game seems to be a fantasy variation of such titles as Crusader Kings II, in which players not only defend their kingdoms against attacks, complete quests, and respond to randomized events, but also "arrange marriage alliances to ensure your heroic bloodlines can handle any future combat situation."

As for combat mechanics, the game features "line of sight and fog of war mechanics come into play as your squad explores beautiful dynamic 3D battlefields where danger may lurk behind any corner." Heroes can be customized, and learn new skills such as melee, ranged, and arcane abilities; they age as well.

Gamers can check out the Kickstarter page here. The game will be released around July 2014.