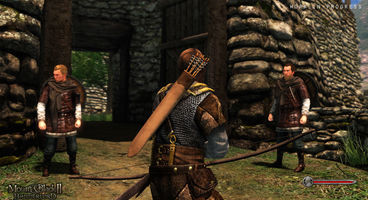 The screenshots can be found on Strategy Informer here.

According to the official press release, "The once-mighty Calradic Empire is in a state of decline. Warlike tribes have seized swaths of its territory. Client kingdoms have declared their independence. The Emperor has died without leaving an heir, leaving three jealous factions to scramble for power. Mercenary companies, bandit lords and nomads hover on the sidelines like vultures waiting for a meal.

A hero who can master the art of single combat, of leading armies in battle, of plotting ambushes and raids, and of exploiting the rivalries of noble houses and tribal clans may be able to unite this Empire -- or, alternately, to deal it the final blow that sends it crashing down. Will Calradia experience one final sunset of imperial glory, or slip into a night of chaos before a new age dawns?"

The game has no release date, and will be released exclusively on PC.