05 February 2014 | By Simon Priest
Confirmation from CCP Games has just been announced that they will proceed with an outdoor monument to the EVE Online community, which they revealed plans for at Fanfest 2013.

It will serve as a "physical manifestation of the respect and appreciation" that CCP has for its fans, and as a "gift to Reykjavik," the studio's home for the past 16 years.

The monument is to stand atop a half metre high metal and concrete platform, and will be engraved with all main characters of EVE Online players as of March 1st, 2014.

CCP will also include the names of EVE players who have passed away during the MMOs lifetime, with a web-based app helping to find the locations of specific names on the monument. A laptop will be buried beneath the monument base to serve as a time capsule with videos, messages and wishes from developers and players. 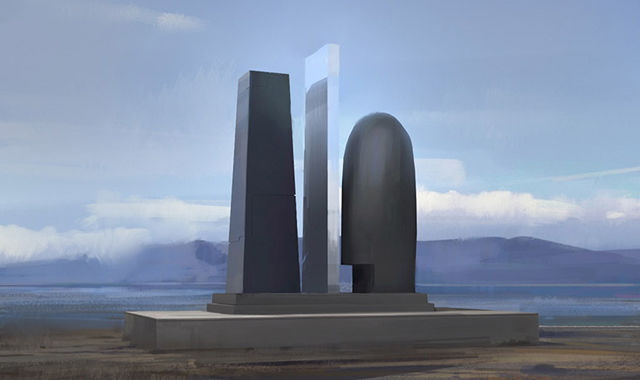 "Our intention is to immortalize the contributions of the millions of people of the EVE universe in a way that extends beyond their immortality in our games," said Hilmar Veigar Petursson, CEO of CCP. “Honoring them as part of a timeless monument shows how virtual lives and adventures have reached a new level of meaning and impact that weaves into and enhances those that happen in this world."

"We are humbled by all those that have joined us on the journey so far, and it’s our hope that this physical piece will continue to gather energy and relevance into decades to come, becoming like EVE Online and outliving us all."

The monument to the EVE Online community will unveil Wednesday, April 30th, a day before the festivities of Fanfest 2014 begin, and which is held at the Harpa Concert and Convention Center, Reykjavik.

CCP Games has released concept artwork of the 'Worlds Within a World' monument, sculptured by Sigurður Guðmundsson and assisted by EVE Online's art directors Börkur Eiríksson and Ásgeir Jón Ásgeirsson.