How to build your own house in Star Wars: The Old Republic

08 July 2014 | By Nick Horth
Remember that scene in Empire Strikes Back where Darth Vader nips back to his Coruscant crib to chill out and neck a couple of beers? Or when Luke Skywalker invites everyone back to his apartment on Tatooine for a round of space-KerPlunk?

Now you, too, can recreate those iconic movie scenes with Star Wars: The Old Republic's upcoming player housing feature. In this blog post lead designer Jesse Sky talks us through how it all works.

"As you reach level 15 and wrap up your mission on Coruscant or Dromund Kaas, it’s clear you have become an important player on the galactic stage," writes Sky, "notable enough to attract powerful friends… and dangerous enemies. You need a fortified location to consolidate your power base – a platform from which to expand the influence of your legacy. What you need is a Stronghold – a customizable bastion of military might and personal luxury."

To get one you can pick up a mission from several holo-terminals found on either the Fleet station or your faction's capital world. This will lead you to the Stronghold Directory, where you can view and purchase a property using either in-game money or purchased Cartel Coins. Once you unlock a Stronghold, it is available to any character tied to your legacy account.

"Each Stronghold has a unique floor plan which is composed of 8 to 12 rooms – for example: large living spaces, small rooms, a garage, a balcony, and so on,"

Sky explains. "By purchasing a Stronghold, you will automatically have access to the first room. You can expand your Stronghold by clicking on locked doors, which will prompt you to unlock the attached room using credits or Cartel Coins." 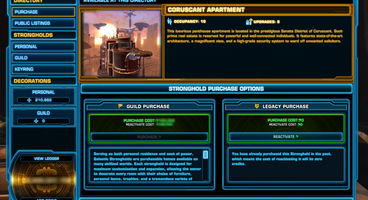 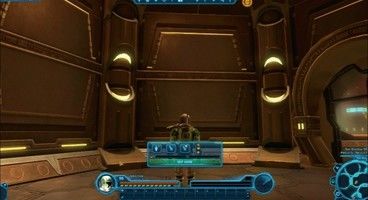 Decoration for your pad can be unlocked by purchasing them from new vendors, or "as new rewards for Reputations, PvP, Crew Skills, and more". Each new decoration will also be available to other characters on your account.

Editing your home involves using 'Decoration Hooks' to place items in specific locations. You can slightly nudge bits and pieces around within each Hook zone, to give things a more natural feel.

"Hooks are defined primarily by surface type and size – for example, a medium floor hook fits any medium-sized furniture that belongs on the floor, such as tables, beds, shelves, computers, etc. Banners, placards, and structural pieces might fit into a medium wall hook. When you first enter your Stronghold, you should find a variety of hook options laid out in such a way that you can immediately start decorating in an intuitive way."

Once you've got things set up to your liking, you can even invite your friends or guild-mates round your new home. "You can send a temporary invitation to a player in much the same way that you might send a group invite," says Sky, "or you can send a more permanent invitation in the form of a key. Players with a key to your Stronghold can access it even when you’re not online, and if you decide to upgrade their key, they can also send invitations or kick players out."

This all sounds nice enough, but I'd like to know how much money it will add up to once you factor in the separate costs for decorations, new rooms and so on. Anyone still playing The Old Republic? Does this new player housing feature float your boat at all?