09 October 2014 | By Admin
Latest Kerbal Space Program update Economic Boom focuses less on the spectacle of space launches, and more on the admin side of things. Don't worry though, there's lots of explosions to keep things interesting.

The Kerbal Space Center, where players build and launch their rockets, is now fully destructible, which means its more important than ever not to have your intrepid spacecraft topple out of the air ten seconds after launch.

"Buildings can be decimated by poorly-steered rocketships and in the game’s Career Mode, require costly repairs for players trying to manage their space agency," developer Squad explains.

One of the buildings its important not to crush into dust is the new Administration Facility, where you can select and activate various Strategies - policies that affect the way your space programme is run. Here's three examples:

Aggressive Negotiations: Enables players to get a discount on the cost of parts but at a cost to Reputation on each ’˜discount’

Unpaid Intership Program: Boost your Science earnings without spending any Funds by hiring unpaid interns to do the data crunching. Working for the Space Program surely is its own reward, isn’t it? Well, as long as an agency’s Reputation lasts that is.

Economic Boom is out now. For more in-depth information on the update, check the official FAQ. 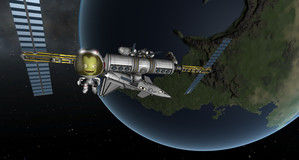