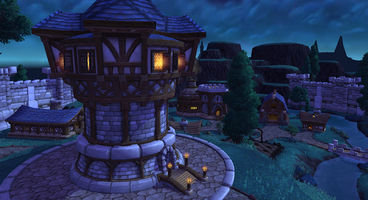 Blizzard's fifth expansion to World of Warcraft is due this autumn, announces the studio. Pre-purchasing has begun which includes Dread Raven Mount and Dread Hatchling Pet in WoW, and other goodies.

The level 90 boosts are now available to buy standalone, and are charging £40 in the UK. Warlords of Draenor introduce new lands and adventure, as well as garrisons.

A standard and deluxe edition exists, much like for previous expansions. Pre-purchasing now grants immediate access to the one free character boost as part of the package.

“We’re sending players deep into uncharted territory with Warlords of Draenor,” said Mike Morhaime, CEO and cofounder of Blizzard Entertainment. “New features like the Garrison will give players a commanding role in the Warcraft saga like never before, and everyone can get in on the action right away with the included level-90 boost. There’s never been a better time to go to war for the Horde or the Alliance.”

· Explore a Savage World: Explore the hostile world of Draenor, home of the orc and draenei races, as it once existed, and adventure in all-new zones alongside characters central to Warcraft history.

· Build a Garrison: Construct, command, and expand your own customizable stronghold on Draenor, and gather NPC followers to collect resources and embark on missions on your orders.

· Instantly Upgrade to Level 90: Upon pre-purchasing the expansion, boost one character of your choosing to level 90, making it easier than ever to enjoy the latest content together with your friends.

· Adventure to Level 100: Reach new heights of power and unlock bonuses to further enhance your abilities on your way to the new level cap of 100.

· ...And More: Take on a wide array of Dungeons, Raids, Scenarios, Battlegrounds, Challenge Modes, and more—no matter what kind of content you enjoy, new adventures await.