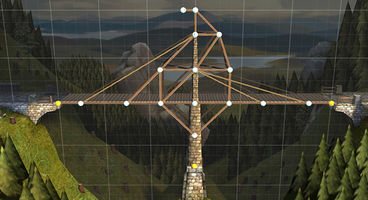 Today Bridge Constructor takes a leap backwards in time to Medieval engineering days of yore. Developer ClockStone puts a humorous twist on the series, with invasions now a thing.

Instead of building a mighty bridge to scoff at all that ox-cart traffic, you can now design bridges that will fall to pieces to stop an invading army. Covered bridges will protect your own troops.

"Bridge Constructor Medieval turns back the clock a few centuries and provides construction-hungry players with new materials, a proper background story as well as many new features. Go back to the Middle Ages and create some masterly built bridges from small to gigantic ones," reads the press release.

"Protect your constructions from sieges and fight back the enemy by well-timed collapsing bridges. Additionally, the picturesque setting of beautiful castles and landscapes will drag you into the game like never before."