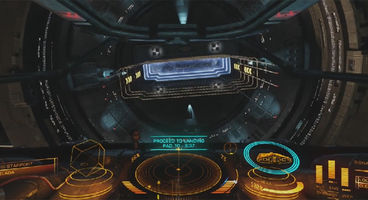 David Braben and Frontier have just released Alpha 3 for Elite: Dangerous which starts fleshing out the game beyond "just testing the technology behind it." Docking is now available, and early hyperspace jumps are in.

Player progression also opens up because resources can now be spent aboard the space stations, letting pilots upgrade their ships. A new video has been posted.

Upgradeable modules like heat sinks and cargo scanners are available if you've the funds, as well as weapons, damage repairs and the opportunity to clear bounties.

"Alpha three is particularly significant as we can start to see the game itself being built out, as opposed to just testing the technology behind it," said Frontier boss David Braben. As repairs are now a major mechanic 'switching on' with Alpha 3, players will need to make some calculating choices.

"We are looking forward to continue benefitting from the enthusiasm and feedback of those participating in our Alpha process and players will begin to enjoy key elements of gameplay.” Elite: Dangerous has raised over £2.3 million through pledges so far, and alpha access is available to purchase, with all post-launch expansions included.