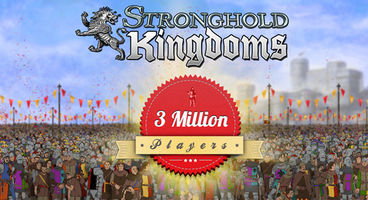 Firefly Studios has announced that MMORTS Stronghold Kingdoms has achieved over 3 million players since launch, and remains in the top 10 most popular free-to-play titles on Steam, and in the top 50 overall.

They hail it as a "remarkable achievement" for an indie studio like themselves, and it helps support their transition to digital self-publishing. It's kept Firefly 'healthy and growing'.

They even beat daily concurrent user count by other major IPs in the free-to-play space such as Marvel Heroes and Star Trek Online. They have 220k users active monthly.

"Stronghold Kingdoms has also thrived thanks to its passionate players, all of whom have input on the game’s monthly content updates. This worldwide audience hails from over 100 different countries, with more than 200,000 monthly active users sharing 22 game worlds. They have played a pivotal role in the continued growth of the game, with hundreds of thousands of players signing up to play Stronghold Kingdoms as a direct result of friend invites," said Firefly.

The MMORTS features actual villages, towns and cities across its game worlds and last month they added a 'Europe' world into the mix where over 30k players are currently scheming and fighting to control 33 countries.