19 September 2014 | By Nick Horth
Sand Trap is the latest map from Titanfall's upcoming DLC pack IMC Rising to get an in-depth preview from Respawn.

"Sand Trap is my attempt take some of my favorite lessons from Titanfall development along with some new ideas and put them together to make a brand new experience," writes designer Chris Dionne.

Slap bang in the middle of Sand Trap is a buried bunker, which lets Titans go to town on each other outside while pilots fight a close-quarters battle below ground. Deep trenches let the pilots cross the map in relative safety from the mechs, but lead to natural choke points for on-foot combat.

"By having a trench network that pilots can use to cross the level,"

Dionne explains, "the surface can be left very sparse. This lets Titans dominate on the dunes and creates interesting battles as they crest the hills, often lining up to rain down death on the other side. Pilots shouldn't have it too easy though, so the trenches have an open bottom that drops into reservoirs of unrefined fuel - instant death by goo!"

Dionne says the map offers a very different experience for each game mode; in Last Titan Standing the open field of view makes for a kind of long-range tank duel across opposing dunes, while in Capture the Flag focus switches to the main trench access route that runs from capture point to capture point. A chamber in the center of this run is the perfect place to plot an ambush.

IMC Rising is the last map pack set to be released for Titanfall. It comes with three new maps, and it's due for release later this year. Respawn is hosting a Twitch live stream of the new content on September 23, which you can catch here. 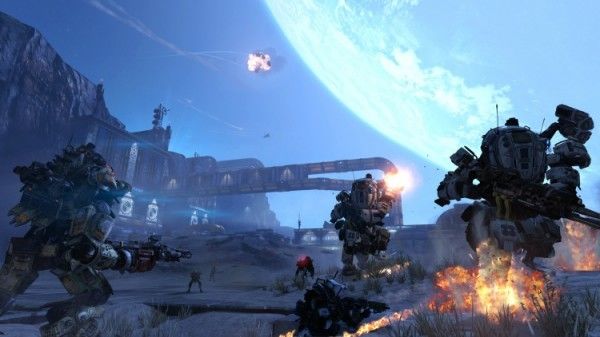