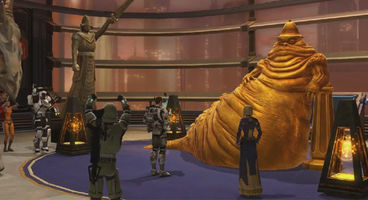 BioWare has officially unveiled their free-to-play Galactic Strongholds expansion for Star Wars: The Old Republic. It's due this August and features player-owned 'stronghold' housing on various planets.

They're "customizable bastions of personal luxury," and are joined by Guild Flagships. This is the MMO's second F2P add-on and early access is scheduled for June.

It adds the long promised Guild Flagships where capital ships will provide a guild its own base of operations, and these will join their faction's starship fleet.

There are some incentives for those who subscribe or who have done in the past. Subscriber early access will begin June 24th for Galactic Strongholds, while Preferred early access starts July 29th. The official launch of the free expansion hasn't been dated beyond sometime in August.

A Nar Shaddaa Sky Palace Stronghold is given to those who subscribe by May 11th, which apparently has a 1.5 million credit value with three additional rooms unlocked. There are also bonus Cartel Coins on special offer if you subscribe by April 2nd and May 4th of 500 and 1,000 respectively.

Check out the official Galactic Strongholds page for more.