23 November 2014 | By SimonPriest
Got some extra blood circulating you're willing to see shed in the name of gaming and blood donation? Kickstarter has gone live with a campaign for Blood Sport, which is going to literally drain you dry.

Well, not so much if you're actually good at not being shoot. The idea is "stupidly simple," says the team behind it. The rumble feedback is 'hacked' to let an Arduino know it's time to pay up.

"With our other projects, like Shoot The Banker, Surrogaid and Prank House, we took the real world and brought it into the digital space. Now, with Blood Sport, we’re taking the consequences of the gaming world and having them affect you in real life. So every time you get hit in the game, blood will be intravenously drawn from your arm," explains creators Brand & Grotesque. 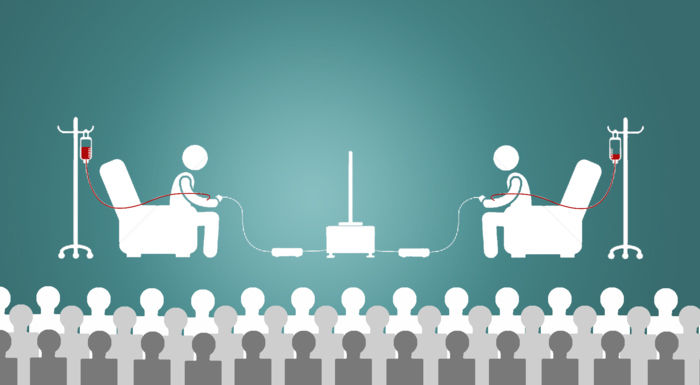 "It’s stupidly simple. Remember the rumble pack? Well, nowadays most video game controllers rumble when you get shot in the game. That rumbling means that an electrical signal is being sent to the controller to let you know you’ve been hit. All we’re doing is re-routing that same electrical signal and using it to turn on the blood collection system."

Why the heck would anyone do this? The idea behind it is to help with blood donation drives, and what better way to make them exciting than by shooting 'donations' out of others. The better or worse you are doesn't matter as long as the red stuff keeps flowing.

This Kickstarter is to develop hardware to let this kind of event take place with little technical fuss.

"Our goal is to develop a refined multi-player unit that can be taken across the country for blood donation gaming events. We are not a charity and we are not a game manufacturer. We are simply creating the gaming hardware that will allow us to get gamers thinking about more important issues while still doing what they love."

It's an interesting twist and could be a very worthy addition to videogames as a force for good. Check out the Blood Sport Kickstarter campaign for more where the team seeks $250,000 CAD to get their blood sucking units out the door.