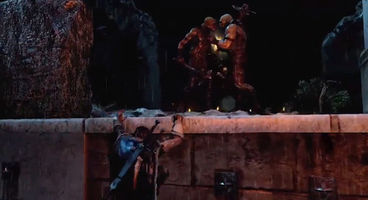 Recent footage of gameplay for Middle-earth: Shadows of Mordor certainly does reveal a strong imitation of Assassin's Creed animations and general practices.

Seriously, can someone tell me how Assassin's Creed 2 code and assets are in this Middle-Earth: Shadow of Mordor game?

@missharvey this is *my* code in that game! I better at least see myself in the special thanks. WTF?

I can't find info about Ubisoft licensing their AC2 code/assets to external companies... someone in journalism needs to get digging on this.

Despite these kinds of words from Charles Randall he later says he's not claiming that the Shadow of Mordor team, which is led by a former Ubisoft man by the way, stole any of his work. In fact Middle-earth: Shadows of Mordor design director Michael de Plater had already said they didn't give Assassin's Creed much thought when making the game, which seems rather odd indeed given the 'Ezio in a parallel universe' vibe you can get from the footage.

"We didn't think much about them at all. We just wanted to do a third-person, open-world action adventure. And then now, just by the time you have stealth and melee combat and you're hunting guys behind enemy lines, the comparisons maybe come out at that point. It definitely wasn't something we were consciously going for," de Plater said earlier in the week before Charles Randall questioned the code and assets.

People seem to think I was implying theft -- not at all. I just assumed either a licensing deal or just AC used as heavy reference.

Middle-Earth: Shadow of Mordor releases on PC, Xbox 360, PS3, Xbox One and PS4 this year. Check out the first gameplay footage below which is of pre-alpha code and judge any similarities for yourself.