An ending to Assassin's Creed is "not exactly true," says Ubisoft writer 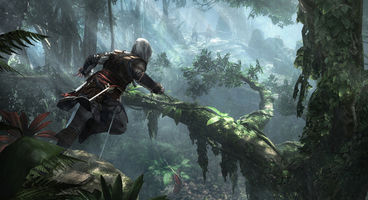 It was remarked last year that Ubisoft had "an idea of where the end is" for Assassin's Creed, but that's speaking only in terms of the current story arc, explains Black Flag writer Darby McDevitt.

He admits there's "been a bit of confusion" over the matter, but while Ubisoft will end storylines they "don't want to definitively end the universe," with plenty left to explore.

McDevitt said that Black Flag served as a "crossfade between the old series and a new one," as loose ends were finally tied off for Animus-user Desmond Miles.

"There's been a bit of confusion in that he once said that Assassin's Creed has an ending - that's not exactly true," Darby McDevitt told Edge, referring to comments by Assassin's Creed 4: Black Flag director Ashraf Ismail. "This storyline has an ending, but because all of history is open to us we see the universe as a Doctor Who type thing. There are so many possibilities we don't want to definitively end the universe, but we can have storylines that have endings."

"The end of the Desmond trilogy changed slightly but it was always intended to end that way. And then about two years ago we planned for another story... we've moved on from specifically defining when a story will end," he continued.

No one is sure where and when the next Assassin's Creed will be set with Ubisoft leaving plenty of teases in Black Flag's modern day sections as to where it could go, like Egypt or the Wild West.

"Nothing ever gets set aside," McDevitt added. "There's often ways to creatively use old technology for new things. One of the things that made AC3's naval combat possible - and then of course AC4 - is that we were able to have characters climb and walk around on dynamically moving objects... This technology, it might appear in future games - it might just not be on boats. It might appear in a completely different way."

Black Flag's ending does suggest London as a likely candidate for a future instalment. McDevitt even envisions a time when we could "create your own character at some point, then we could say you were one instance in the historical flow. I hope that we keep it fresh, that’s our main goal – keep it fun and interesting every step of the way so that if we have to set off in different directions, we can do that.”