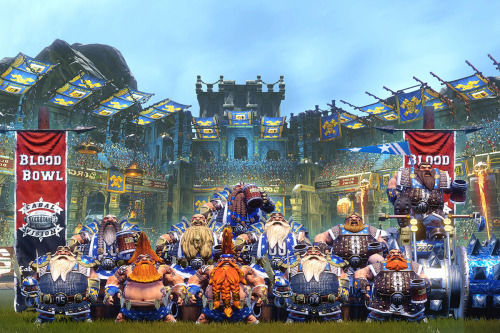 Cyanide Studios' ultraviolent Warhammer sports game Blood Bowl 2 is out this month, and starting from next week pre-order customers can start tearing into the Beta.

As a little tease of what's in store, the developer has released a trailer showing two very different fantasy teams going up against each other, the rugged Dwarfs and wily Skaven.

Dwarfs are "compact, tough, well-armoured, and have a stubborn knack of refusing to die", which are all traits that come in useful for Blood Bowl players. They basically stick to punching the enemy team rather than actually playing the sport, and for some reason they're allowed to take an oversized lawnmower onto the field.

Skaven are trickier, "frail, but rather agile and extremely fast". Most of their special abilities revolve around scampering past the enemy, keeping away from melee-focused players.

The minute-by-minute gameplay is looking pretty solid, and there's clearly a lot of variety in the way you can approach each match. There's also some lovely animation touches, like the way the bare-chested dwarf beserker's beer gut wobbles as he barrels across the field - in general there's been a marked improvement in presentation from the 2009 game.

Blood Bowl 2 will be available on PC and consoles this September 22. Pre-order customers get access to next week's Beta, as well as two extra armies, Lizardmen and Wood Elves.