Boardgame adaptation Legions of Steel on the way this April

03 March 2015 | By Nick Horth
Indie developer Studio Nix has announced that Legions of Steel, its adaptation of the classic robot-smashing board game, is set for release this May 2015 on PC and iPad.

If you're unfamiliar with the board game, players take the role of an elite group of Commandos sent to raid a production facility of the evil Empire of the Machines. You're a bunch of future John Connors, essentially.

"With the one shot, one kill philosophy adopted by the developers," explains Nyx, "every move, line of sight, and action point becomes a resource of strategic importance. So players will have to select the right tactical option at the right moment to eliminate enemies while protecting the lives of their units!"

As you can see from the trailer above, there's an element of Space Hulk about the whole thing, though there seems to be a lot more space available than in that game's cramped corridors. Still, there's a similar top-down viewpoint, and the game likewise requires smart use of you units' gear and unique tactical abilities.

When it launches this May, Legions of Steel will ship with 2 separate singleplayer campaigns, 15 scenarios for solo or multiplayer, and online or offline competitive play. 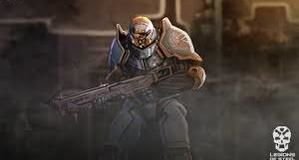