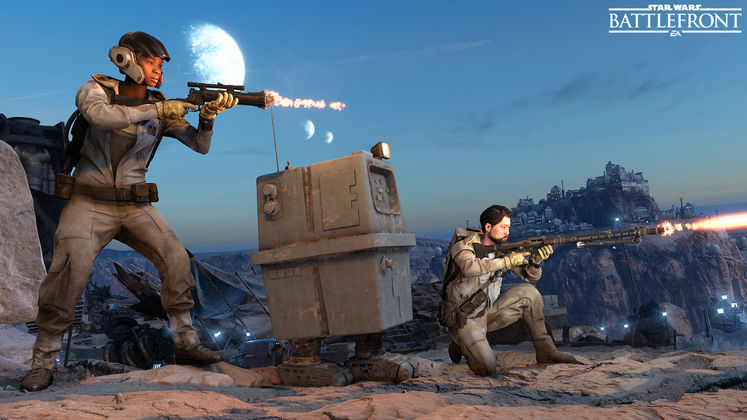 While it doesn't have a singleplayer story mode (boo, hiss), there's no shortage of multiplayer modes to be found in EA DICE's upcoming Star Wars: Battlefront. Only two were shown off in the recent open Beta, but now the developers have lifted the lid on three other ways to play.

Hero Hunt has one player spawn as a Hero character, and seven others as normal foot-soldiers. The troopers have to hunt Darth Vader, Boba Fett or whoever down, and the player that nets the killing blow respawns as a Hero themselves. It's an extended boss fight, basically.

Cargo mode, meanwhile, is Battlefront's take on Capture the Flag. The only real difference from the traditional setup here is that you don't have to have your cargo present at your base in order to score a point. "This creates a tug of war experience where you simply need to collect as much cargo as possible," says DICE. Cargo is a 6v6 mode, more tactical and small-scale than the showpiece cinema of Walker Assault.

Finally, Droid Hunt is another 6v6 mode where you have to track down three charmingly rubbish GNK droids (those ones that look like bins on legs). Maps are fairly small, but the droids are constantly on the move until you start the capture process. There are no vehicles, just close-quarters battle.

Star Wars: Battlefront is out this November 17. Should be plenty of different options to keep you bust blasting away.