Wars not make one great!

The hardest thing about reviewing Star Wars Battlefront for me was in removing the Star Wars spectacle from the actual game, and judging it accordingly. That’s especially hard for me, a guy who can happily watch Attack of the Clones for fun (not The Phantom Menace though, I do have some standards). It’s made almost impossible by the fact that this game has some of the best spectacle I’ve ever seen. Welcome to Star Wars Battlefront, a game that makes shooting people in plastic armour seem magical. But is it a Prequel or, you know, a good one?

Wars not make one great!

It won’t last, but the initial impressions of Battlefront are hugely positive, overwhelmingly so. Single-player or co-op with three different modes and 4-8 levels on each? Multiplayer with TWELVE modes and likewise 4-8 maps for each mode? (Oh, wait, just Nine Modes, the Multiplayer screen duplicates three of them for some reason) Three Hero units for each side and two modes based just around them? A dogfighting mode where either Boba Fett’s Slave 1 or the Millennium Falcon are the starship versions of Hero Units? And that’s before we mention the graphics…

Getting them out the way right now, Star Wars Battlefront is one the best looking games around. The Frostbite 3 engine used in most recent EA games like Battlefield 4 and Dragon Age Inquisition is gorgeous enough, but DICE have really done their homework when it comes to Star Wars. Everything looks and feels just right, from the swoop of a TIE Fighter overhead to the thrum of Darth Vader’s lightsaber to the absolute perfect texturing of the Imperial walkers and stormtrooper armour. If you’re as big a Star Wars geek as I am you’ll probably also yelp with joy when you press the First Person button when using a starfighter. Even beyond the license Battlefront is lovely, with lush foliage, wind whipping up snow, and some terrific explosions. Sound effects are just as spectacular, although I’m pretty damn sure they could’ve got more accurate soundalikes to voice all the Heroes. 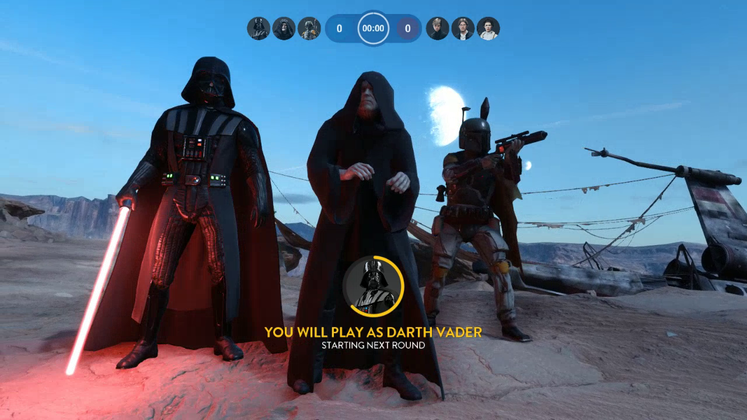 Wipe them out. All of them.

The game itself though will be absolutely love it or hate it, and that comes down to a decision (wise or not) to make Battlefront as inclusive and straightforward as possible. And fun, I’ll embolden, but how long-term that fun will be is in doubt. Anyone with a love of Star Wars and the simplest grasp of shooters can come in and have a blast. No complicated loadouts, just one laser weapon that you can unlock more of (but all quite similar) as you Rank up and three “Power Cards” you can choose and shift around. Vehicles, special weapons, and Hero units aren’t earned or standing around the battlefield, they’re little tokens that have to be found and used like an item.

It’s all very game-y and simplistic, but for many people that’ll be rather refreshing. My interest in multiplayer games these days is flagging but the lack of complication and the “fun first” ethic DICE has gone for means that I’m far more likely to boot up Battlefront than Battlefield (any version). It’s a bunch of mindless fun with a modicum of thought and depth, and that’s just fine. However anyone looking for something that you can really dig deep into weapon upgrades and the like is out of luck. You’ll know the maps better, utilize the Starfighters and Heroes more efficiently, and be able to fire a Jump Pack at the right spot so you can ride an AT-AT and surprise the Rebel scum. Happy with that? 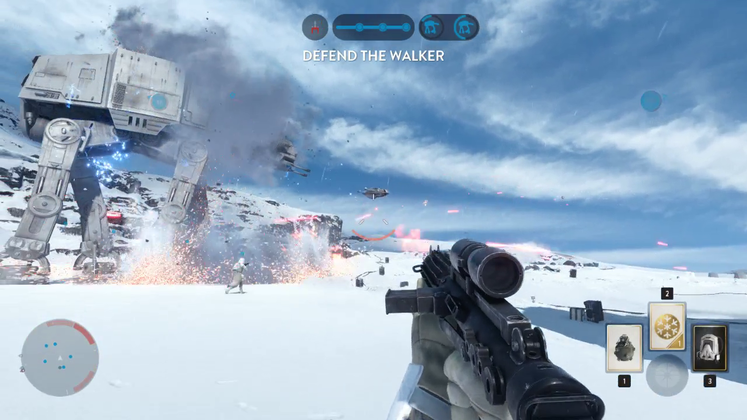 I have a bad feeling about this

There are unlocks every level but barring the excellent Jump Pack they’re mostly superfluous, and the less said about the atrocious “character customization” page the better. Moreover it’s really disappointing how anti-team-play Battlefront is, banning any in-game voice chat and so concurrently making the game nicer for people to experience but utterly lacking in any co-ordination or planning. For a game so focused around taking sides and team-play it’s a big negative… but then again I can’t deride it too much for placing a gag on the sheer volume of homophobic 12-year-olds that have stopped me enjoying online multiplayer for the last five years either. This comes down to your opinion, dear reader.

The Nine Multiplayer Modes are a mixed bag for sure. There are several old classics among them: Team Deathmatch (‘Blast’), Capture The Flag (‘Cargo’), and a few variations on Domination (‘Supremacy’ the most direct, ‘Droid Run’ basically the same but with moving control points). These are as fun as you’d expect, although ‘Droid Run’ feels pretty superfluous and I doubt anyone will give it a go more than once. ‘Drop Zone’ is similar but with a single pod at a time that must be defended and opened to gain access to power-ups, which can be hugely frustrating but at least a bit quick and tactical.

‘Hero Hunt’ is the classic asynchronous “one player is overpowered and can score, other players need to kill them and become them” mode, except with Star Wars Heroes. I really enjoyed this one except very often you’ll either do all the work and someone else gets the kill, or find yourself playing a whole match and never getting a go as the Hero. That won’t happen in my personal favourite mode ‘Heroes Vs Villains’, which is 6v6 where three players are normal soldiers and the other three are Heroes. The round ends when all the Heroes on a side are defeated, and it’s best of six rounds so everyone gets three goes as a Hero. Awesome fun for a quick blast. Likewise Starfighter-only ‘Fighter Squadron’, except it’s a bit more throwaway and incomprehensible than I would’ve hoped. I played it three times then never touched it again. 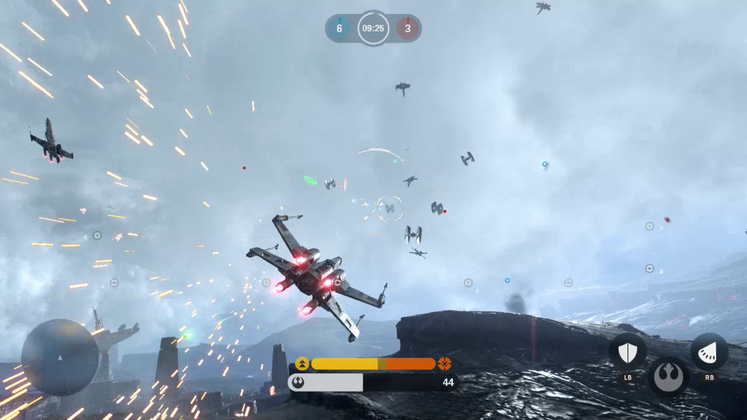 Then we have the highlight of Battlefront, the epic ‘Walker Assault’. Four maps over four planets, 20v20, switching locations over three parts of the map, with 1-2 AT-AT Walkers traipsing slowly over the map to a destination. Each time the focus is two Uplink stations for the Rebels to activate (then defend) or the Imperials to deactivate (and defend). It’s truly epic, spectacular stuff, and this is where Battlefront comes alive and feels like a true Galactic War no matter how game-y the little tokens floating about are. With the possible exception of ‘Supremacy’ (which is set across similar giant maps) all the other game modes are just fun bits of extra padding, but ‘Walker Assault’ is the one you’ll be going back to time and time again.

Which makes the worst part about Star Wars Battlefront triply annoying: there aren’t enough maps and everything soon gets repetitious. 4-8 maps for each mode sounds great, but all of them repeat. ‘Walker Assault’ and ‘Supremacy’ share the same four giant maps that you’ll know intimately in no time at all, and all the other modes (barring ‘Fighter Squadron’) use the same eight smaller maps. There are only four planets too, and while Tatooine, Hoth and Endor make sense as they’re the big planets of the Classic Trilogy the new planet Sullust begs the question - if DICE can design one new planet for Battlefront why couldn’t they have done a dozen more, like Alderaan, Nar Shaddaa or Ord Mandell?” Why do even the small maps have to stick to these planets, limiting their scope, when we could’ve easily seen the Death Star, the Tantive IV, or Bespin? And why if there’s Tatooine is there no karking Jabba’s Palace map?! 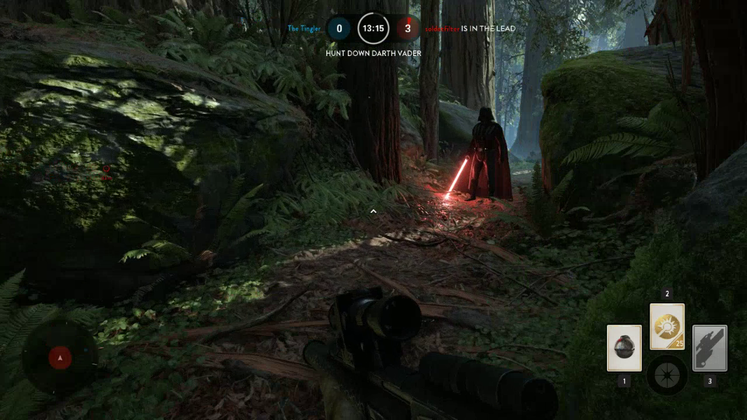 You should not have come back

I was hoping the single-player/co-op side would break up the repetition, but it’s dishearteningly minimal. There are three modes - ‘Training’, ‘Battles’ and ‘Survival’. ‘Battles’ consisting of regular and Hero-based and see two teams facing off each other to kill opponents and collect tokens, and needs to be co-op. ‘Survival’ is also better in co-op and it’s just you versus waves of AI enemies. Would it surprise you that ‘Training’ is the most fun? There’re only five levels but they’re basically single-player missions, and act as a tantalizing and depressing glimpse of what a proper Battlefront campaign could’ve looked like. It could’ve just been 10 more of these with variable difficulty levels and I would’ve been satisfied, instead it’s just “extras”. If you’re planning on buying Battlefront for the single-player stuff don’t bother.

The one thing I will give DICE absolute kudos for (other than their attention to Star Wars detail) is how stable Battlefront runs on PC. Despite the hefty system requirements that seemed to suggest my specs of an Intel i5-4670 CPU @ 3.40GHz (4 CPUs), 8Gb RAM, and an NVIDIA GeForce GTX 660 with 2Gb RAM would be Minimum I’m actually running the game with a mixture of High and Ultra settings with absolutely no slowdown, very few bugs or glitches (at least that I’ve encountered), and no crashing. Online while I’m disappointed with the lack of server lists and the online matchmaking system is terrible (I’ve lost count of the amount of one-sided matches I’ve played) I’ve only had one disconnect my entire time playing and I haven’t had any visible lag at all. The only PC-specific criticism I can mount is that vehicle controls are absolute garbage with mouse/keyboard so have a gamepad handy for those moments - although even then the controls are still hardly intuitive.

While Star Wars Battlefront is by no means a triumph, it’s not a disaster either. It nails the Star Wars atmosphere perfectly, with an incredible sense of spectacle and some of the most awe-inspiring moments in multiplayer gaming. That said it’s all pretty skin deep, with none of the depth that turns fun multiplayer into an all-time classic. It’s still fun, loads of it in fact, but only in short bursts and map repetition will sink in quickly. Battlefront is not a game that’ll be played in great numbers a year from now, and EA’s decision to charge £49.99/$59.99 for it on PC (with another £40/$50 for a Season Pass rather than continual map updates to keep players playing) will leave many gamers feeling short-changed, especially with the nonexistent single-player. Nevertheless it can’t be denied that Battlefront is quite simply a fun multiplayer game that utilises the license very well. And in the four years since Kinect Star Wars that’s all I ever wanted.

That sweet, rare moment when you discover and activate a Hero Token.