GTA V is already the second most popular game on Steam, less than a day since launch

Nestling in just behind Dota 2, which let's face it, is almost impossible to knock off the Steam top spot, GTA V is being played by just under 175,000 users. 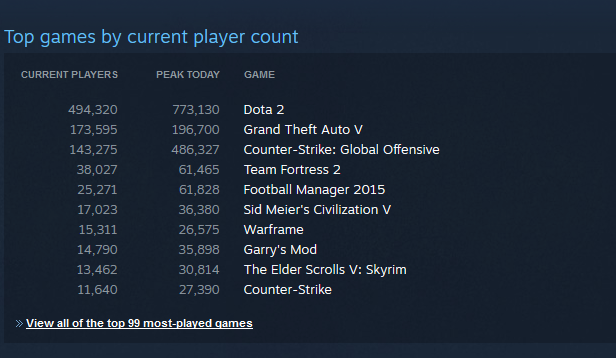 The perennial top two on Steam are Dota 2 and Counter-Strike, so it's an impressive debut for a game to displace either of those. Then again, this is a Rockstar release, so high numbers aren't a huge surprise. It will be interesting to see how the figures balance out for the rest of the week.

I've only very briefly dipped into GTA V on PC, but so far it looks like a robust port with a lot of scalability. Time will tell if the long, long wait's been worth it, but so far the game's off to a good start.