15 April 2015 | By SimonPriest
An announcement for Invisible, Inc. has snuck up on us from Klei Entertainment, as the tactical stealth game will be giving Early Access the slip on May 12th and fully releasing. Now we've got a date, no one can buy it.

That's right, Klei has disabled Early Access purchasing because they want new players to have "the best experience possible, rather than play the interim build." They've been 'vague' on the changes coming.

The team don't want to completely give away everything that is being added in the final complete version of the game, and so provide us with a "deliberately vague list:"

▪ A massive balance pass on all the items and programs, and a few new items, augments and programs to round off the suite.

▪ 4 new agents, and a balance pass on existing agents, each with their own special augments and items.

▪ A daemonic new enemy, in the new Plastech corporation.

▪ World generation and gameplay options screen, where you can set the game up as you see fit.

▪ Expert Plus mode -- for those who want the ultimate Invisible, Inc. challenge.

▪ A revamped Endless mode with increasing difficulty as the days progress, up to difficulty 10 missions.

▪ New music for every corporation, final mission, and more.

▪ A giant upgrade to the UI, sound, FX and visuals.

We'll be infiltrating corporations to get at their secrets in Invisible, Inc., where you'll be using stealth, tactical precision and teamwork in these high-stakes, turn-based raids. 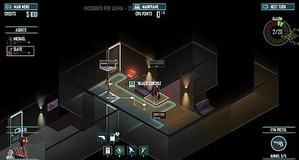