15 May 2015 | By SimonPriest
Unfortunately we don't get the beans spilled on the new 'Subject Interaction' feature teased for the Common Sense expansion for Europa Universalis IV, as we have to wait until Paradox Development Studio has finished the new UI.

This developer diary instead looks at the changes coming to the Holy Roman Empire, and more specifically how Imperial Authority and Reforms are handled. Ticking values will now decide if Authority is on the rise or not.

The team wanted to have the HRE less susceptible to 'big lurches and exploits' and so have overhauled the way the internal politics for it work. An Emperor fulfilling their role well will see more Authority building. They also revised the Imperial Integrity modifier because it "was both too strong and too arbitrary". Reforms have been buffed instead. 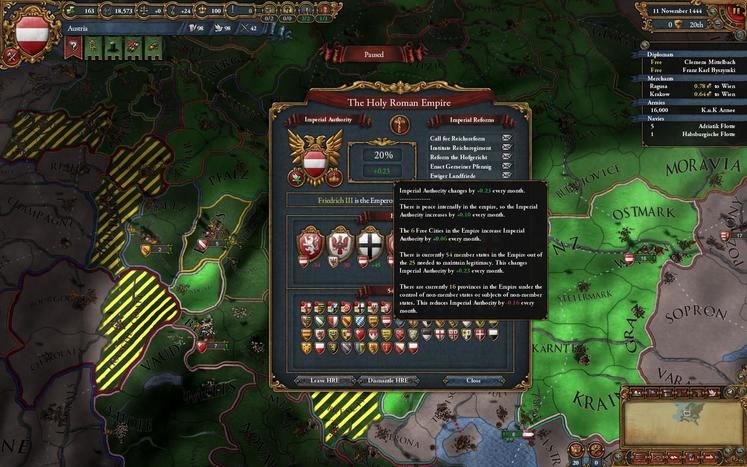 "Imperial Authority has had a significant rework in 1.12. The old system tended to advance or retreat authority in big lurches and was very open to exploits. It also did not take into account how well the Empire was doing overall, and there was little benefit for the Emperor to maintain a large number of member states," explained the latest dev diary.

There's also a large selection of new achievements to be earned with the upcoming 1.12 update and the launch of expansion Common Sense.

Check out the EU4 - Development Diary 15th of May 2015 for more information.