15 June 2015 | By Nick Horth
I'm not really that enthused about expensive limited editions for games, but if you are going to do one, at least follow in Bethesda's footsteps and make a big deal of it. The Fallout 4: Pip-Boy Edition will set you back a not inconsiderable £100/$155, but it comes with an actual, wearable Pip-Boy wrist computer.

It's not simply for show, either. As well as being an accurate reconstruction of the in-game model, the Pip-Boy allows you to slot your smartphone into a socket, and along with a special mobile app, manage your in-game inventory and character menu by tapping away at your arm. Completely pointless, but rather cool.

As Bethesda's exec producer Todd Howard freely admitted; "As far as stupid gimmicks go, I chose the best f*****g one," he remarked on-stage. As well as the Pip-Boy, this special edition also packs in a Pip-Boy Pocket Guide filled with hints and tips, a poster, a collectible metal case, and a big Pip-Boy capsule case to carry everything in.

Fallout 4 and the Pip-Boy Edition will both be released this November for PC and next-gen consoles. For more on the game, check out our E3 coverage. 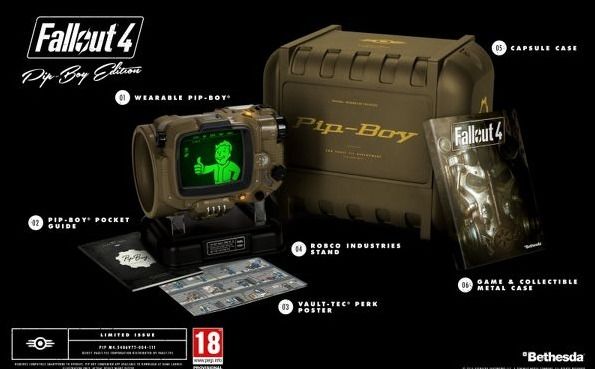