Crowd-funded reboot Carmageddon: Reincarnation will release in full on April 23

19 March 2015 | By Nick Horth
Franchise reboot Carmageddon: Reincarnation earned $625,000 on Kickstarter back in 2012, and made its Steam Early Access debut early last year. Now it's almost ready to release in full.

Original series creator Stainless Games has announced that the game's final, official release date will be April 23. They've also provided a nice rundown of everything fans will get in the final version.

Check out the trailer above and marvel at the fact that the ancestor of this game caused an absolute s***storm in the media when it released back in 1997. How charmingly silly and quaint it looks now. 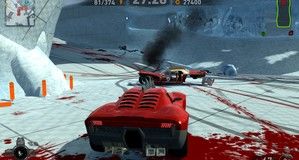