There has been precious little information released for Mount & Blade 2: Bannerlord since its announcement back in 2013, but developer TaleWorlds has released a new dev blog detailing the overworld map and explaining what the player is able to do utilizing it.

Aside from providing perspective on the game world as well as presenting a beautiful pastiche of the land, the overworld map has a more functional purpose. It is, according to the developer, "where a large chunk of gameplay lies." The point of the map is to give vital information to aid the player in conquest.

"Taking the icons as an example, it is now possible to see what a village produces by looking at its icon," explained the blog. "These change dynamically over time to reflect different production facilities constructed in the village, or additions of buildings like castles. On the HUD, more information is presented to the player, including morale, food supplies, gold and more. We are currently restructuring the HUD to provide even more information without making it too overwhelming." 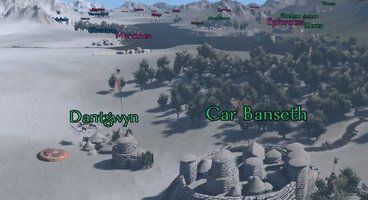 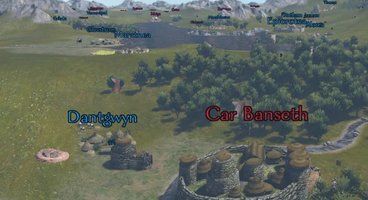 The map is populated by bandits, villages, lords, and so on; the units are called "parties". Some of the things that parties do include:

The developer also noted that the map has changed from Warband, "not just by the activity of the player and NPCs but also by the passage of time. Changing seasons affect the weather and transform the landscape sending snow creeping south during winter. Significant gameplay effects, of the changing conditions, are felt in the effectiveness of different troop types. Cavalry and ranged units in particular will have a harder time in rain or snow. One major change from Warband is how time progresses; the yearly cycle has been shortened to twelve weeks, which adds more importance to the changing seasons and ageing of characters."

The developer posted a video showing off the accelerated passage of time on the overworld map to give an idea of how the mechanics worked together. The changing colors of the names indicates which faction they're now allied to.

Mount & Blade 2: Bannerlord is expected to see release sometime in 2016.