BioWare has said there's more story DLC planned for Dragon Age: Inquisition after the Jaws of Hakkon, and thanks to a survey it seems the studio plans "a last adventure" that should help tie up some loose ends.

We'll be facing a new and terrifying threat, if the leak proves accurate, and take on "the one who started it all". It's rather ambiguous as to who this refers, but whoever it is we'll decide the "final fate of the Inquisition".

The knee jerk reaction might be to suspect everyone's favourite swamp hag, Flemeth, who just happens to be a significantly powerful being. However there's another rather terrifyingly powerful figure in Inquisition that does fit the bill of 'one who started it all'.

Without giving anything away, should it refer to this particular threat then it could conceivably revisit a certain painful choice we made in the Fade, and hopefully give us much needed closure.

The survey reads: "Having saved the world of Thedas by closing the Breach, your next mission will determine the future of the Inquisition. Your mark suddenly glows, erupting with magic connected to the Fade. Assassins attack in shadow. An invasion of enemies begins. Win a race against time to face a great evil before it is too late."

"In this story-based expansion, playable after the events of Dragon Age: Inquisition, you will embark on a last adventure with your team to confront the one who started it all."

Among a bullet list of supposed features there's to be a testing of mettle against "the full force of the disciplined and battle-hardened Qunari army", more diverse areas to explore throughout Thedas, new secrets of the Fade to unlock, and a new skill-proving optional gameplay mode "that challenges even the most seasoned veteran".

Dragon Age: Inquisition will be expanding with more story DLC but whether this survey leak reflects the final product is anyone's guess. Hopefully a full expansion at least is in the works. 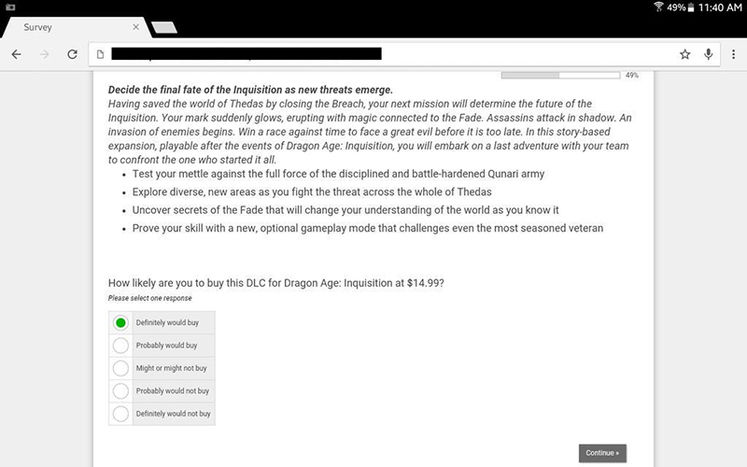